Novuss is a cue game which shares attributes of pocket billiards (cue, pockets) and carrom (pucks).  It is very popular in the Baltic states and Northern Europe. 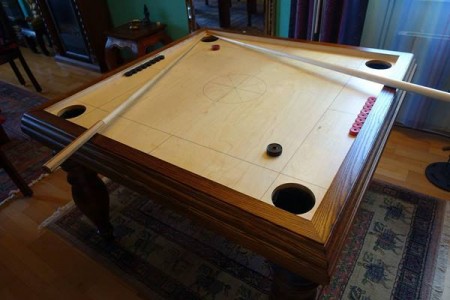 Novuss (also known as koroona) is a two-player (or four-player, doubles) game of physical skill which is closely related to carrom/ Karrom, and pocket billiards. Novuss is a national sport in Latvia. The board is approximately 100 centimetres (39 in) square, typically made of wood, has pockets in each corner, and lines marked on the surface. The board is usually placed on a stand, but may be placed on a barrel or other surface that allows the pockets to hang down properly. It uses small discs instead of balls, and each player has their own small puck instead of the cue ball used in other cue sports. Players use a small cue stick to propel their pucks into their colored object discs (the novuss equivalent of object balls), knocking them into the pockets. The winner is the first one to sink all eight of their object discs (of which there are sixteen in total in two different-coloured sets, plus the two pucks).

The game is sometimes informally referred to as "Baltic billiards" or "Scandinavian billiards", but these are misnomers, since although it is a cue sport in the broad sense, Novuss does not use billiard tables and balls, and Finland where the game is known as 'Korona', is not part of Scandinavia, which instead comprises Norway, Sweden and Denmark.

On the other hand, a similar game is played in Sweden and Denmark, where the game is known as 'Couronne' and 'Bob', respectively. However, unlike in novuss, the object discs in Couronne/Bob are arranged into a circle formation on the centre of the board like in carrom.