From October 16 -20, 2013, the worldchampionship 3-cushion billiards was organised in our home city Antwerp (Amberes, Belgica) at the Lotto Arena. Time to look back at the 2 previous WC-ships 3-cushion billiards organised in Antwerp in 1974 and 1953.  Besides the organising city they had other aspects in common.  Both WC-ships would prove to be genuine thrillers resulting in finals won by the smallest margin, being 1 point.  At both occasions a Belgian carom billiards player would play the final and draw the short straw... At both occasions the winner would come from another continent.

For a detailed report of this WC-ship just read this article from the German Billard-Zeitung.  It is in German but the detailed results per round will be clear to anyone : Billiard Zeitung 31_4 WK 3B Okt 1953.pdf

Courtesy to Henny de Heus : Special thanks to Henny de Heus from the Netherlands who dug into his huge billiards collection to provide me with additional photo's of the 1953 and 1974 worldchampionships 3 cushion billiards held in Antwerp. Besides being a talented billiard player Henny founded a billiard business, De Graafschap, in Buren, Netherlands.  Thanks Henny, a big hug!!

Below a photo of the place in Antwerp where the championshipship was played, de Stadsfeestzaal.  This hall still exists and has been beautifully renovated and now holds shops and restaurants.  At the right hand side the players.  From left to right and top to bottom : Fauconnier (Belg), Rudolph (Ger), Siguret (Fra), Rombouts (Belg), Tiedtke (Ger), Vingerhoedt (B), Berti (Braz), Ventura (Spain), Navarra (Arg), Lagache (Fr), Pereira (Port) and Carrera (Arg).


Cover and first page of the Championship brochure 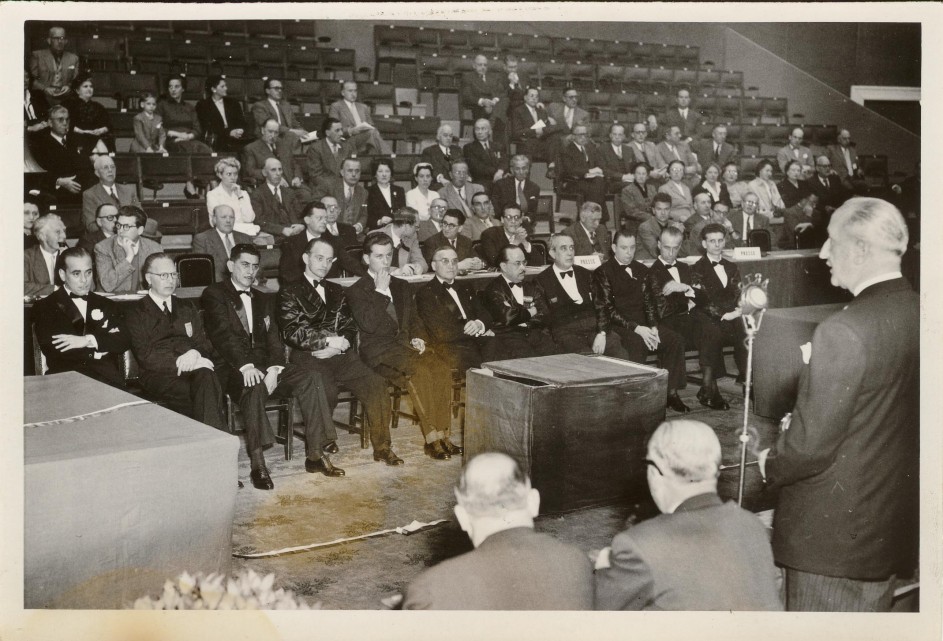 A tournament ticket allowing access to all matches costed 25€ in 1953. Exactly the same as for the 2013 worldchampionship in Antwerp. Not everything changes for the worst. Photo at the right, the prices.  As these were official amateur championships no price money was awarded not even allowed. In those years there will still a bunch of professional players around,

The top players and their signature.  Belgian Rene Vingerhoedt would lose the final with 1 point from Argentinian Enrique Navarra. 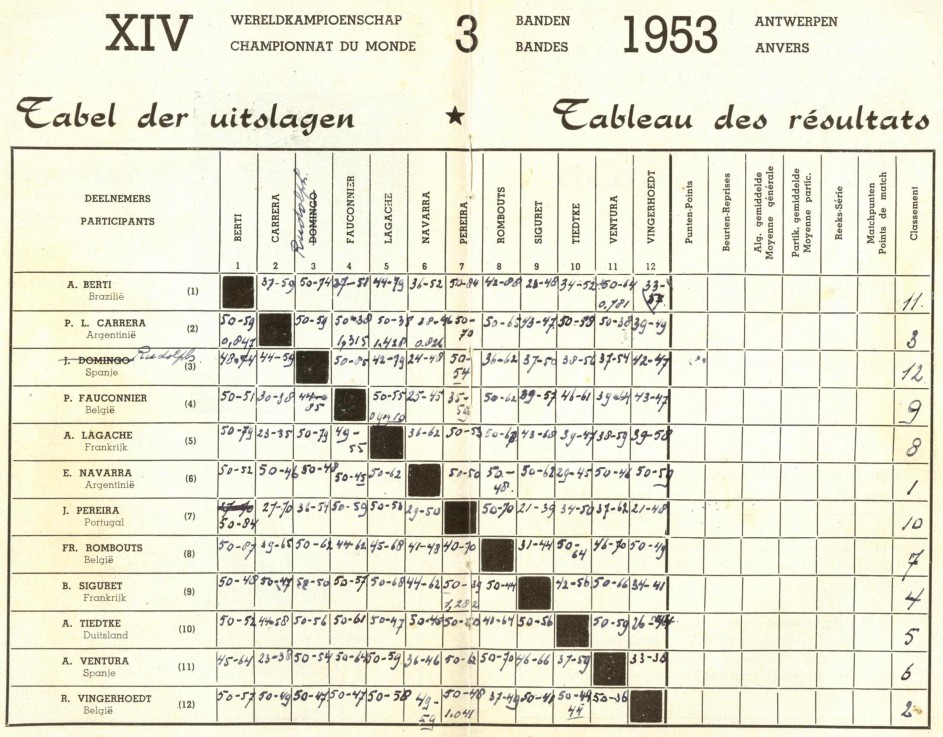 Photo at the left, the Belgian officials.  Photo a the right shows that nos seat remained empty during the final.

Pedro Leopoldo Carrera - El Grafico magazine.  In this era billiards was a very popular sport in Argentina attracting a lot of spectators.  In the late 40ies, 50ies and early 60ies the sport was at his height in South-America.  In those days magazines like El Grafico and Mundo Deportivo regularly published articles and photo's about our beautiful sport.  Players like Carrera, Enrique Navarra, Ezequiel Navarra and Willie Hoppe got on the cover of these magazines. 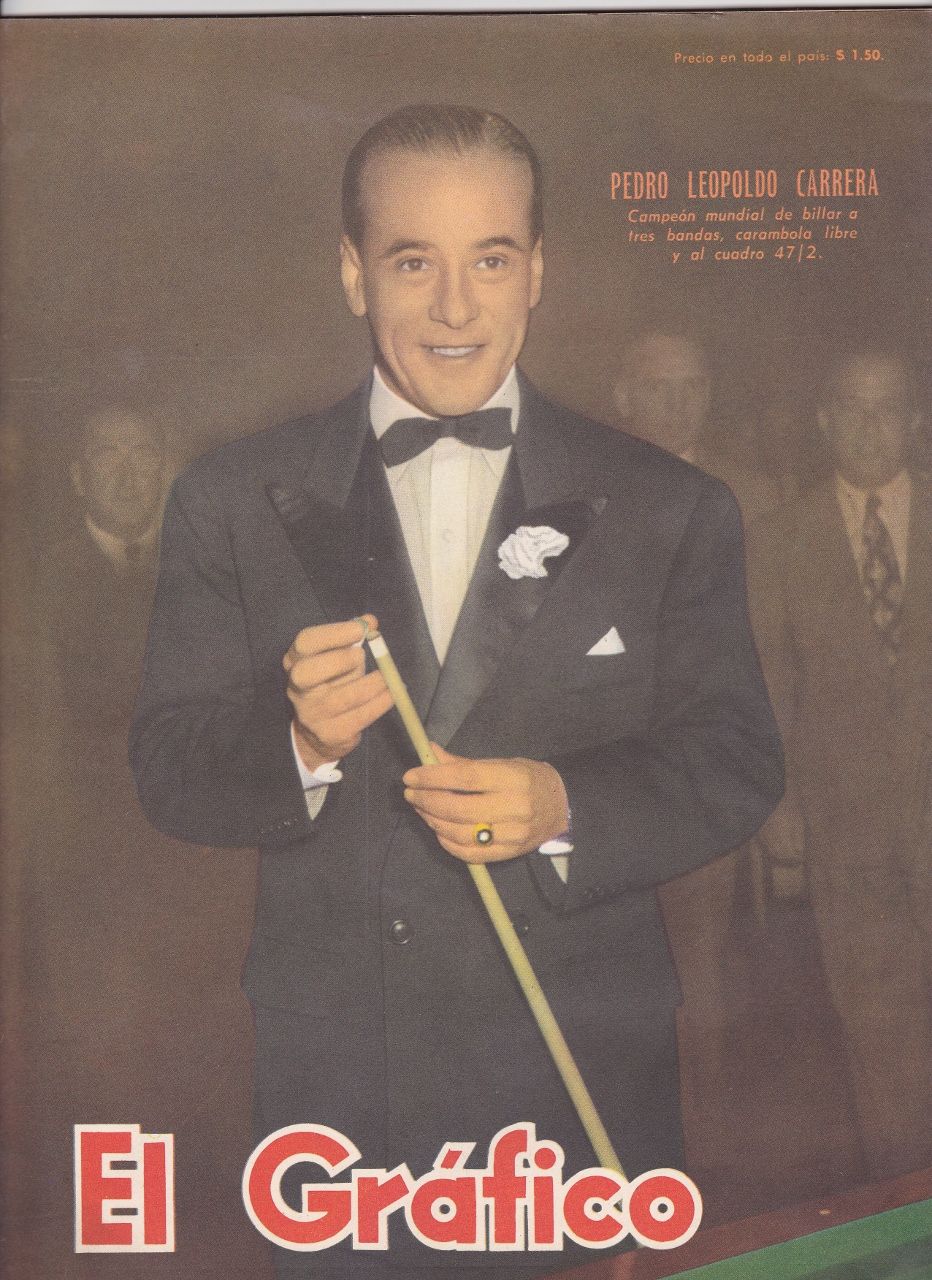 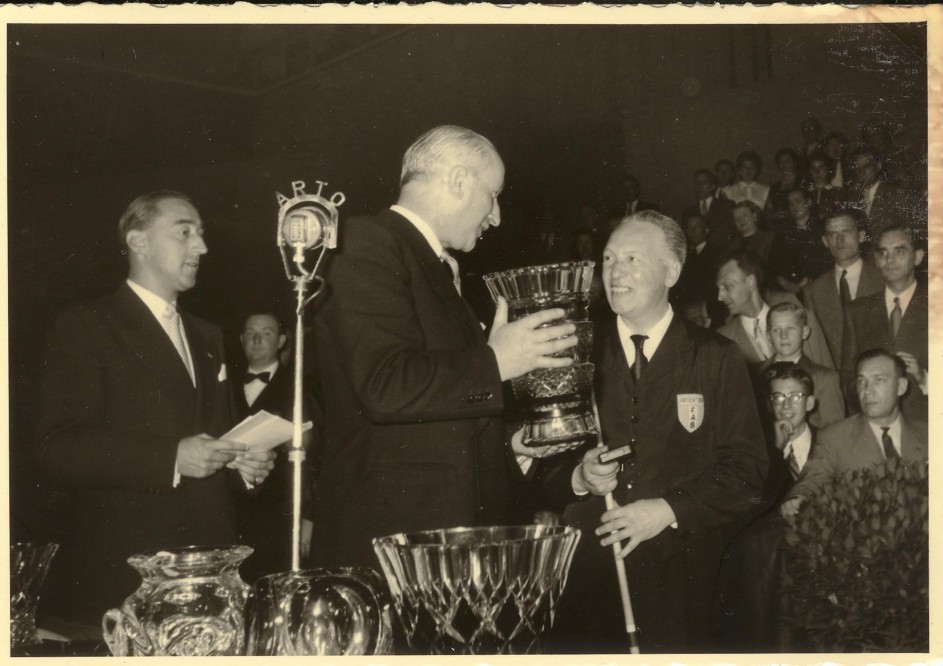 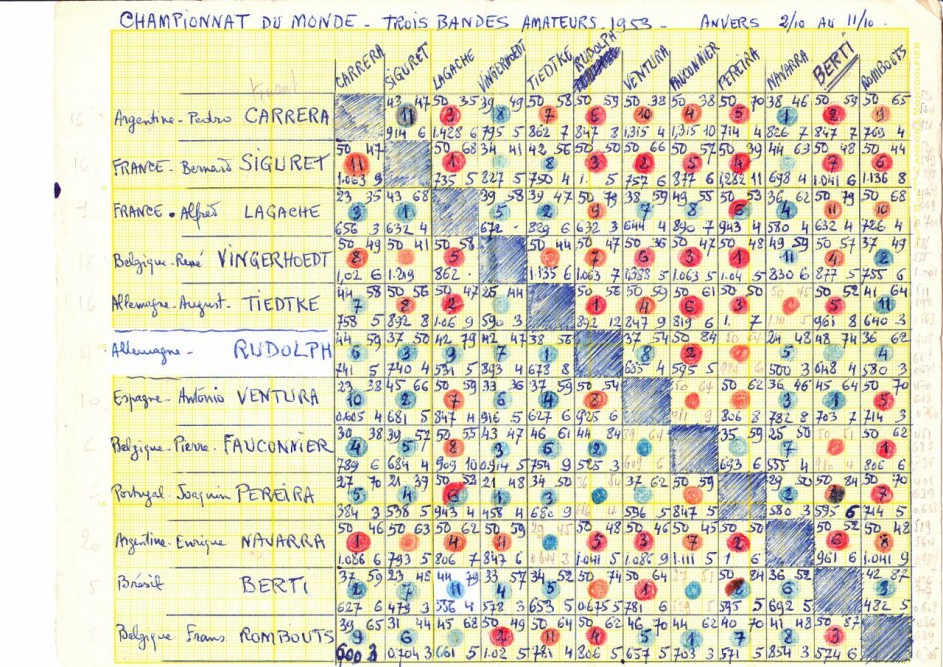